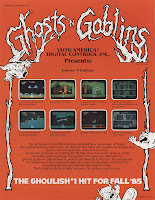 Just in time for fall 2011 with Halloween right around the bend, comes another ghoulishly great platformer from Capcom - Ghosts 'N Goblins. The game was distributed by Taito America, as well as Romstar. The game was distributed in two ways; sold as a kit with a generic romstar overlay, button stickers, pcb, marquee... However some did come in dedicated purple Taito cabinets. The one I was able to track down was in the original dedicated purple cabinet which was in great shape. It's one of the heaviest cabinets in my entire collection. The game is pretty simple you play as "Sir Michael" according to my bezel, I always thought it was "Sir Arthur" trying to rescue the princess from the devil. Throughout the game you battle ghosts, goblins, birds, zombies, plants, just to name a few. You have a spear to start out with and are allowed to get hit once while you have your armor on, if you get struck you are reduced to running around in your underwear. Throughout the game you can pick up other weapons; a knife, shield, fire, axe etc.. Although only 6 stages exist in the game it's HELLishly difficult.

This particular cabinet eluded me for a long time. Despite the fact that I think the game is extremely difficult something about it keeps pulling me in. Maybe the catchy music, possibly the cool art or perhaps the fact that it's so impossible leaves me reaching for more quarters in my pocket. I saw an ad posted on craigslist for one out of state in CT, I drove with another local collector friend from NY to see it. When we got to the guys house he said he made a mistake and didn't have the game ?! Another one I saw was posted for sale in Florida but the shipping killed the deal, and I once again couldn't justify paying for the high shipping costs. Finally the same local collector who I went to CT with had one in his collection that he was willing to part with. I had helped him move his 32 games into storage locally and he said I can have it whenever I wanted to pick it up, so I couldn't pass up the opportunity.

The game was also ported onto many other home consoles that you might remember playing those versions. It made it's way to the following systems ; Sinclair ZX Spectrum, Amstrad CPC 464/6128, Atari ST, IBM PC, Commodore 16, Sharp X68000, Nintendo Game Boy Color, Game Boy Advance and the NES, PSP, as well as the Apple Iphone. The game 3 years later had what some to consider a sequel that rivals the original and that's called "Ghouls N Ghosts". The sequel Ghouls n Ghosts had majorly improved graphics, you could fire up and down with your weapons and had a golden armor suit that had a special weapon to name a few. I might down the road purchase a JAMMA switcher and have both PCB's inside the cabinet. But one things for sure I'm happy that I finally found and added Ghosts 'n Goblins into my collection. 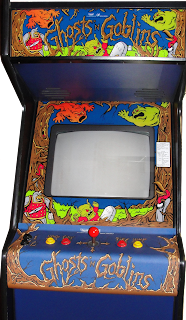 The game is in great original condition. Bezel looks near perfect, marquee looks great, control panel looks great with the exception of the joystick needs to go into the chuck of my drill for cleaning. I'm not sure if they originally planned this but I like how the instructions on the bezel are just illuminated enough from the light from the marquee coming through the speaker grill for you to read when the lights are all off.
Posted by Josh at 11:50 AM