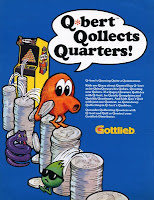 Q*Bert was manufactured by Gottlieb which was released in 1982. Gottlieb was predominately a pinball company but made a few video games . The Gottlieb staff had difficulty naming the game, and, aside from the project name "Cubes", it was untitled for most of the development process. The staff agreed the game should be named after the main character, but disagreed on the name. During it's development Q*bert was under the project name Cubes, but was briefly named Snots And Boogers and @!#?@! during development. The game was conceived by Warren Davis and Jeff Lee. Lee designed the titular character based on childhood influences and gave Q*bert a large nose that shoots projectiles. His original idea involved traversing a pyramid to shoot enemies, but Davis removed the shooting game mechanic to simplify game play. A few early test models, however, were produced with @!#?@! as the title on the units' artwork. During a meeting, "Hubert" was suggested, and a staff member thought of combining "Cubes" and "Hubert" into "Cubert". Art director Richard Tracy changed the name to "Q-bert", and the dash was later changed to an asterisk. The game play consists of the levels are designed as pyramids with various colors that you need to change them to in order to advance to the next level. The game also consists of other characters which is known on the back of the flyer as "Who's who, and what's what". You have a green character with glasses known as "Slick", he is no threat to Q*Bert if you touch him you earn points but he changes the cubes he hops on back to their original color. Another character like his brother slick, "Sam" makes Q*Bert's job harder by changing the colors of the cubes he touches. You also have a green dot / ball when Q*Bert touches it the magic ball will freeze the board for a short time enabling Q*Bert to freely hop around to try and complete his task. When a purple ball reaches the bottom it becomes "Coily". This snake villain chases Q*Bert trying to smash him. Other enemies include a "Wrong way" character that travels sideways and will stop Q*Bert if they touch. Another enemy just like wrong way is "Ugg" he travels sideways and is dangerous to touch. Lastly you will notice floating discs around the level, you want to lour the snake / coily to the edge of the pyramid and than hop on a disc this will yield you 500pts as well as trigger the solenoid.
Q*Bert was outside of probably Pac-Man & Donkey Kong one of the most merchandised arcade games. It had it's own short cartoon, lunch boxes, toys, board games, puzzles, books, pencils, watches, house ware items etc.. Q*Bert was a pop culture icon. Soon Q*Bert along with many other gaming icons will be resurrected back to the public in Disney's new movie "Wreck It Ralph". As a side note I'm a big fan of Disney and visit Disney World every so often, I wasn't allowed to check out "Disney Quest" which I was told is essentially my basement. I really wish Disney would drop off a "Fix It Felix Jr" to my house !

Now for a fairly incredible craigslist story on how I obtained my Q*Bert. This guy for a while posted a Q*Bert on craigslist at $950.00 obo, out of no where dropped it down to 300.00, I spoke with him on the phone he claims it's not his game it's his friends game and his friend had 2 Q*bert's and was moving to I think he said Carolina..The reason the price was dropped according to the seller was because when someone went to look at the game which when they did; they fiddled with it and offered him a low balling 150.00 for it or so he claimed. Since they left he claims the games not working, but was working a few days prior. The picture he posted I said to him, that photo looks like an ebay listing photo in IL, and he's in NY. After I called him out on that he began to become frazzled even though the guy claims he posted the photos, he seemed to rush me off the phone.. I asked him for an address of where the game is located, he said it's a new road and wanted to meet me at a Chinese restaurant ? I'm thinking maybe he has a conversion game or whatever and doesn't want to post photos of the actual machine if one even exists. The guy also said he had other stuff for sale but I've been there done that drove to CT once and the guy tried to bait and switch me and some friends and we didn't bite.  And to add to all of this he gave the "I'm going to burn it and get more satisfaction speech" on the phone. Guy seemed very shady on the phone, I've been in sales for a long time and if I'm selling something I treat the buyer correctly. Supposedly the game was located in Armonk Westchester NY. I didn't really want to drive 2-3hrs for no reason. Being that the photo was wrong, he wanted to meet me at some random Chinese restaurant, and it wasn't exactly around the block from my house. At this point I'm thinking this is a scam and a waste of time, but It was my day off so I figured I would entertain the possibility of it actually being legit. 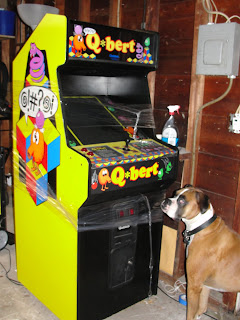 The game looks as though it was HUO (Home Use Only) for what it's worth the game had slightly over 100 total plays. The inside of this thing is pretty immaculate to me considering it's age Id be willing to bet he had to be the original owner, if not it was hardly used and well maintained. 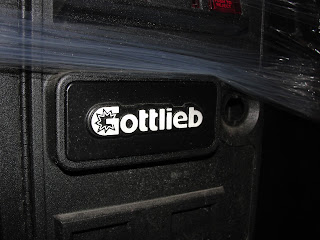 The game has the raised Gottlieb coin door, even saw the Gottlieb card inside to be mailed away, the knocker all boards even the monitor looks fresh, all the boards are present and still protected by a large cardboard.This thing looks like it was in a time capsule. It does have CPO ware, minor chipping on the bottom from being moved around which are the only issues IMO. The raised Gottlieb coin door is a fairly sought after part that sometimes is not present on the cabinet. Some alternative Q*Bert's had blank doors used mainly with the "Mellow Yellow Q*Berts" which often found their way into 7-11's.

The owners friend made all of these arrangements, so the dude rolls up in a white dealer plate cargo van.

And I'm like man I'm either getting kidnapped, rapped, killed all three.. but I decided to follow him to this house that apparently had an 8 car garage.. I don't even think on MTV cribs have I witnessed that. So sure enough we pull up to huge mechanical iron gates with a security pad... and sure enough one of the biggest houses I've ever seen, dude wasn't lying two 4 car garages across from each other, guy had a legitimate lift that you would see in a service bay in one of the garage spots and trust me when I tell you it wasn't a standard size garage it was massive!!.. in the back left corner of the 4th bay of this mansion garage lol was low and behold this sparkling Q*Bert.

I plugged it in, fired it up..nothing it was dead. I didn't even care considering the condition I was ready to take this thing at 3 beans regardless, especially after traveling blah blah. I plugged in some Christmas lights he had laying around in the garage and told him that likely the people that came prior flipped both the interlock switch as well as the test switch on the outlet. And wouldn't you know it the Q*Bert fired up like a champ! The monitor was out of synch after making the adjustments it looked great. The PCB's were all incredibly clean. 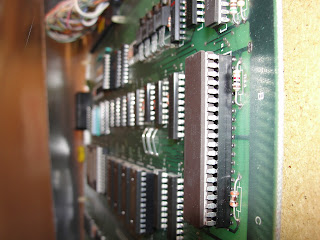 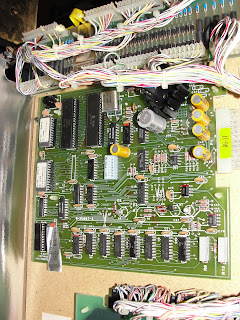 So was this ad a scam, NOPE! Sometimes you just gotta @!#?@! go for it!  I got really @!#?@!ing lucky. I have been looking on and off for about 6+ years sometimes if your adventurous and patient or perhaps lucky enough you will find the game in the condition and price you want.

While I generally for the most part like to fully restore games this Q*Bert did not really require that much time money or effort to get it working 100% again. Q*Bert wasn't moving on the levels, but I wasn't able to look under the control panel until I got the game home. Most control panels have 2-3 latches, Q*Bert actually has 1 latch slightly off center to the right, and 2 wing nuts holding down the control panel which slides forward / away instead of lifting up or down. Once I was able to take the control panel off I noticed why Q*Bert wasn't moving, a rubber sleeve wasn't touching the micro switches. Being that the inside of the cabinet was clean sure enough I spotted the part that had fallen down on the inside of the cabinet. 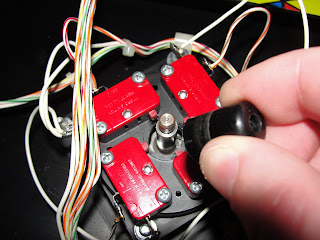 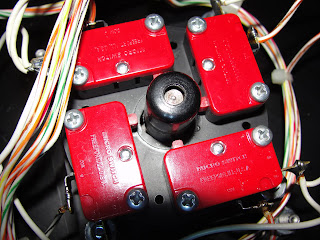 I actually ordered a joystick rebuild kit which I didn't install but wanted to have one on hand from www.twistywristarcade.com as well as a new knocker solenoid. The Knocker / Solenoid is a nifty little feature where if you hop on a disc and Coily falls off the pyramid or if Q*Bert falls off you would hear a "Knock" on the inside of the cabinet, As if the character fell on the inside. Gottlieb was a pinball company who dealt with solenoids so they must of had the idea to incorporate it into a video game which really does add a nice novelty element to the game. My original knocker wasn't working so I replaced it, and now it's working great. The knocker requires 30v and can be turned on or off via a dip switch on the PCB.
One problem that Q*Bert's have is the original battery that's installed to the PCB could potentially have a tendency to leak / create battery acid damage. I took an early precaution and just de-soldered it from my board entirely. They battery is used for saving high scores but other methods have been implemented in creating safer ways to do so, for now I just removed my battery. 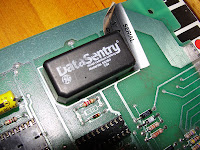 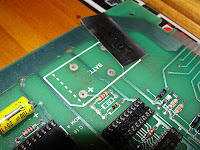 The marquee light wasn't illuminating so I had some spare FS-2 starters laying around, popped one in, and sure enough the marquee light turned on.
The control panel overlay isn't perfect but I don't think I'll be replacing it anytime soon as I believe the CPO still has plenty of years left, I might change my mind though. You will also notice that the joystick is mounted for a diagonal use set up for controlling Q*Bert. After I used a magic eraser the control panel pops a little bit more. Below are pictures before cleaning the control panel. 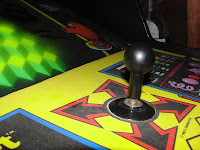 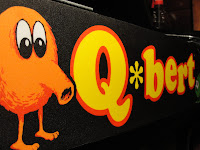 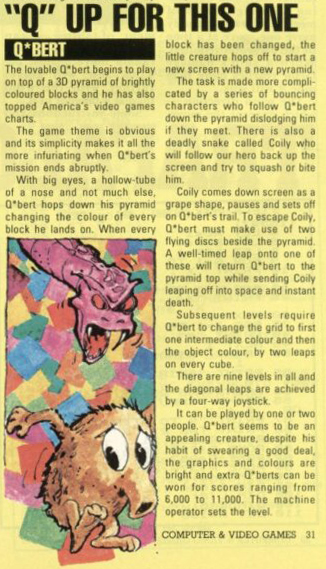