"One day... In the forest..." Konami made Pooyan and distributed the game to Stern in 1982. In the game your object is to pop wolves balloons with arrows or meat. The game play is for the most part simplistic but as you advance through more levels you begin to realize just how insanely difficult this game gets. When you first start on level one the wolves begin to fall down, and if you miss any of them they will begin to climb a ladder trying to grab you. Every once in a while you will notice other items being tossed down such as strawberries, apples, etc. Hitting the various items that come down will yield you points but could potentially get in the way of you popping a wolfs balloon. The wolves also block some of your arrows, but they can't block the meat you toss at them which randomly appears at the top for you to grab. Also some of the wolves will toss items at you which you can either dodge out of the way, or hit it for points.

I was looking for a Pooyan cabinet for a long time. Throughout the years I gathered up various parts for the cabinet knowing possibly someday I might track one down. The cabinet also is shared by Stern's Bagman, as well as Minefield. While browsing craigslist one day I saw a "commando" inside what would I knew was put into a Stern cabinet. I immediately called to see if the cabinet was still available, to my surprise it was. The cabinet was listed as working, with no photo's of the side of the cabinet I asked what the colors of the side were which would likely tell me if it was a Pooyan (Blue) , Bagman (Yellow) or Minefield (Red). He had said the cabinet was "yellow" which to me indicated 99% it was a "Bagman" cabinet. I still insisted on checking it out. This is the image from the ad on craigslist, showing commando inside the Stern cabinet : 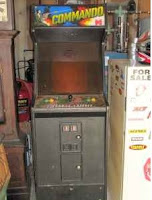 As I was inspecting the cabinet I asked to see the inside, to my delight the inside had blue over spray from the Stern factory, indicating to me that this was originally a Pooyan! The seller said ; "you know what I think I see blue underneath the yellow laminate?!" Sure enough someone at some point around 1984-1985 when commando came out put the yellow laminate over the original blue Pooyan paint! I was happy that I finally found my Pooyan after several years of searching, it's a rather difficult original cabinet to find. All this time it was only about 10miles from my house!

I was excited to dive right into this restoration because I wanted the game for so long, in addition to the fact that I was sitting on parts for it for literally years. The first thing I did was to remove the yellow laminate as shown in this picture: 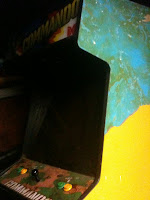 Unfortunately while removing the yellow laminate it ripped small pieces of the plywood right away from the cabinet. The other terrible thing it left behind was a massive amount of adhesive glue type substance from the laminate. To remove the glue / adhesive I used a product called "Goof-Off" which worked rather well. It required a ton of elbow grease and patients to get all of that gunk off. Once all of the gunk was finally removed I used "3M's Bondo Body Filler" to fix the plywood. Once the bondo was applied, I than sanded, prepped the surface for priming and painting. Here you can see the various stages of the restoration:

I decided to repaint the over/ under coin door using "Textured Plastic". It was time to work on the control panel. Buried in my closet was a NOS (New Old Stock) Control Panel Overlay. This particular overlay that Stern used for this cabinet is actually printed directly onto the plexi itself as opposed to an adhesive sticker. I removed the used joystick, buttons, old plexi that the commando used with various typical cigarette burns. After removing the protective layer on the original pooyan control panel overlay beneath were vibrant colors that really popped. I decided to sand the existing carriage bolts on the control panel to get them all shinny again. I replaced the buttons with the correct color scheme, along with an original Wico joystick that the game used. Below you can see pictures of the control panel being restored: 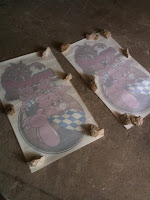 Again time to dig out some parts that have been sitting for a few years. Next up was to flatten the side art that was sitting in a tube rolled for a few years. You should flatten out the side art for any arcade machine that's been sitting in a tube for a while, this will help when applying to the cabinet. Another unique feature that this particular cabinet has is a slide out draw on the bottom which holds the PCB, Power Supply, Wiring etc. Also this game along with other Stern games features a "Bent Marquee" design. This allows you to place screws directly into the marquee itself without using a metal bracket which majority of marquees used. It gives it a floating design, and looks neat without having to use the upper bracket to hold it in place.

After the dedicated bent marquee was installed, the control panel, along with the side art the cabinet looks just about back to it's original 1982 glory. As a side note If you didn't know "Pooyan" in Japanese literally means little pigs. Also supposedly this game was according to some made specifically for Chuck E Cheese's back in the early 80's. Clearly this game is some what based off of the "Three Little Pigs". If you are lucky enough to find this cabinet, my hats off to you this one took a long time to track down and add to my collection. I would consider it pretty rare to come by, so If you see one for sale grab it! Below is a picture of the nearly completed restored Pooyan: 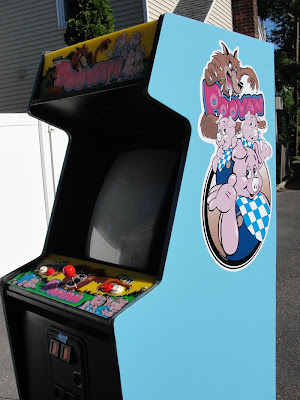