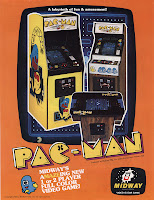 When you think of 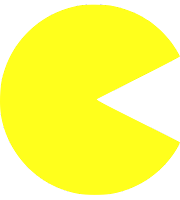 lassic video game titles, it's hard not to think of Namco / Midway's Pac-Man from 1980. The game is simple, yet very addictive and of course one of the most popular arcade titles of all time. I knew that I wanted to add a Pac-Man machine into the "Guscade", but I had no intention on obtaining my Pac project so soon. It all started about two weekends ago when a Craigs list ad posted another title in Connecticut. I went to CT with two other members from KLOV, only to find out that the machines which were advertised were not even available for purchase. In frustration we headed back to NY with an empty trailer and decided to call local Craigs list ads while on the road. Initially people did not seem to be budging on their advertised prices; however we were determined to get a good deal after what seemed to be a pointless lengthy road trip. We came up with a game called "Let's play one hundred dollar cab". Some guy listed a dead Williams Defender, and a Galaxian for $600.00, we offered him $200.00 for the pair and told him we had a trailer and were ready to pick them up immediately. The guy said OK, we were all pretty shocked so we figured at this point we might as well at least check them out. We were able to work out a deal and score both cabinets for $150.00 ! The Defender ended up going to one of the other KLOVers and I got the Galaxian, soon to be my Pac-Man cabinet. 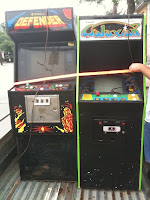 First a little background on Midway cabinets. After doing some quick research I found out that Galaxian, and Pac-Man cabinets are both exactly identical. However although similar looking, Ms. Pac-Man, Galaga, & Bosconian are all of the same Midway style cabinets, but are slightly different than Pac-Man and Galaxian. Also Rally-X is very similar except it's a little less deep. When I first picked up the Galaxian cabinet it was more of a hybrid. The machine had Galaga '88 side art, a Galaga glass bezel, with the rest of the parts being Glaxian. The machine was already painted black and the Galaxian art work underneath was too far gone to recover. I decided that I've always wanted a Pac-Man, and since it shares the same cabinet style I might as well convert the Galaxian to Pac-Man.

When I first picked up the cabinet this is what it looked like: 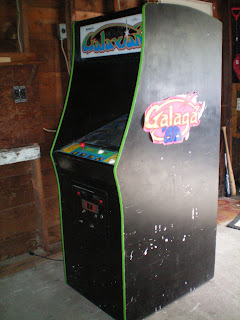 To start with the restoration I first removed the "Galaga '88" side art with a scrapper. Next I applied some paint stripper and removed all of the black paint along with the remaining "Galaxian" original sideart underneath. Began to sand the cabinet down once it was clean enough I was able to prime. In between the coats of primer I used 320 grit sandpaper. 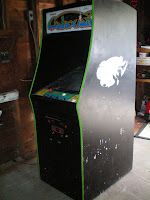 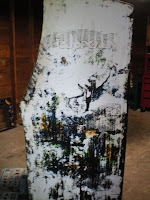 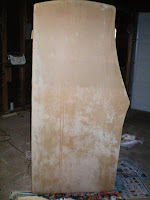 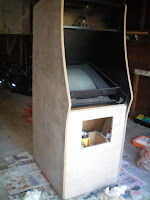 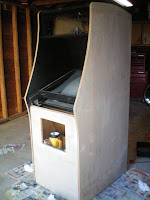 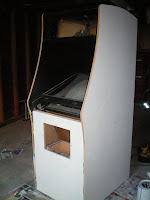 A while ago I was able to obtain a N.O.S. (New Old Stock) original Pac-Man marquee from a KLOV member. I knew that I would eventually use the marquee for my future Pac project. Being that it was just about 30 years old the paper backing was stubborn to get off so I needed to use water, and goo-gone. 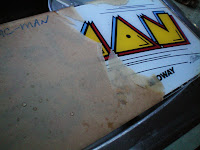 I noticed that after removing the Galaxian marquee, I was going to need to add a light source. Usually Pac-Man and other Midway games during the early 80's had incandescent bulbs. I was told from a member on BYOAC to just add a flourescent under counter light from walmart which was only about $7.00. Since the existing wiring was still intact, I was able to use that and add the fluorescent. This was a cheaper alternative, and saves more energy than traditional incandescents. Also the fluorescent evenly distributes the light behind the marquee. 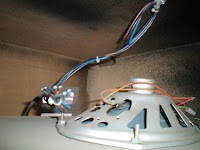 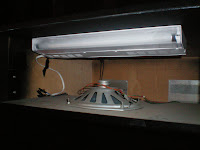 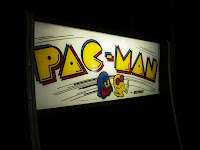 Next I started to work on the Midway coin door. The coin slots were painted over black and shouldn't of been, so I removed them and cleaned them up. Also the coin mechs, the reject buttons were also painted black, so I cleaned those up also using paint stripper. 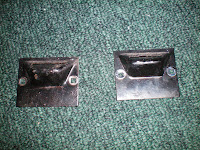 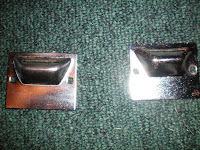 After removing majority of the parts on the coin door; I used more paint stripper, and then revealed the bare metal, sanded, primed and then used "textured black" paint. 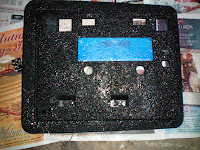 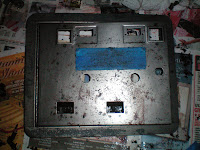 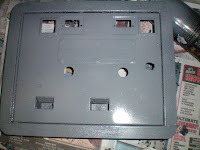 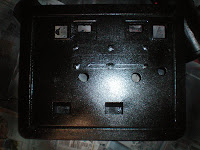 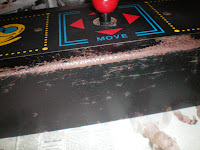 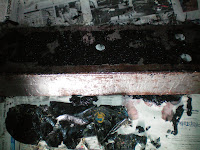 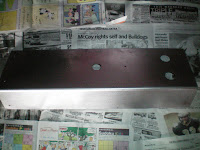 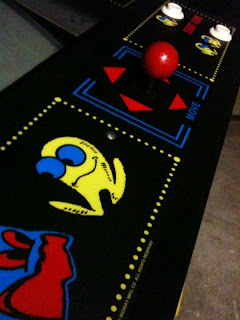 After rolling the yellow paint it's starting to look alot more like a Pac-Man and alot less like a Galaxian: 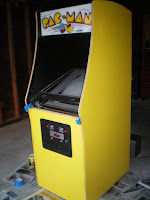 Adding the Stencils took a long time, a total of 9 sheets 3 for the front, left, and right sides (Red,Blue & Black Paint):

Added the glass bezel, the PCB of course,completed control panel, NOS marquee, new orange T-molding and after the stencils have been completed my Pac-Man is just about finished! 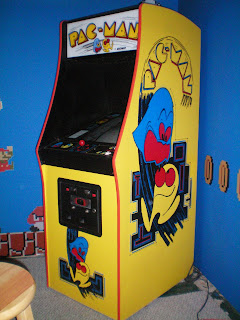