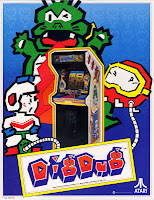 Dig Dug was produced by Namco, and was distributed by Atari in the US. Dig Dug is essentially a maze game where you can dig your own path. Your characters name is Dig Dug and you battle Pooka's and Fygar's. The enemy characters have the capability to float through the maze and Fygar's can breathe fire. Dig Dug can destroy the enemies by "pumping" them up until they explode. Also a way to earn a massive amount of points is by using a boulder or a rock and having it fall down on multiple enemies. On the levels you are also given a bonus item which also results in points. You can partially pump an enemy and than walk through them, this helps build up chances of  combining enemies and flattening them with a rock for multiple points. Each round gets completed once all the enemies are destroyed or if they escape. 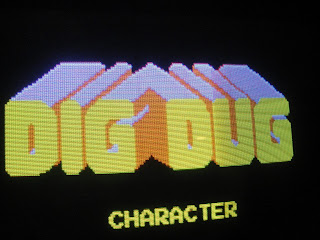 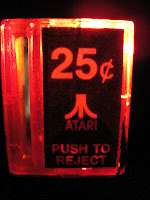 Not really much to say about my game other than I bought it at an auction locally at the same time I bought my Circus Charlie. I bought it because the price was right and the monitor was bright and crisp and had a cap kit recently done to it. It was however missing the glass bezel when I bought the machine. A member on BYOAC was looking to MAME a Dig Dug cabinet the guy was in TX and was hesitant about sending the glass bezel because he didn't want it to break during shipping, but I received it with no problems. I went onto mikesarcade website http://www.mikesarcade.com/arcade/artwork/ataricoin.pdf and printed out Atari Coin Door Inserts which look pretty neat. Below is a picture of my Dig Dug cabinet. In terms of restoration I really didn't do much with this game, I think to date it's likely the least amount of money I've ever put into a game. But it still plays and looks fantastic. Dig Dug certainly has it's fan base, many ports throughout various consoles along with mobile versions of the game still exist today even after 30+ years It's still a very popular game today.

Here is the review for Dig Dug, from the June issue of Computer+Video Games from the year 1982. 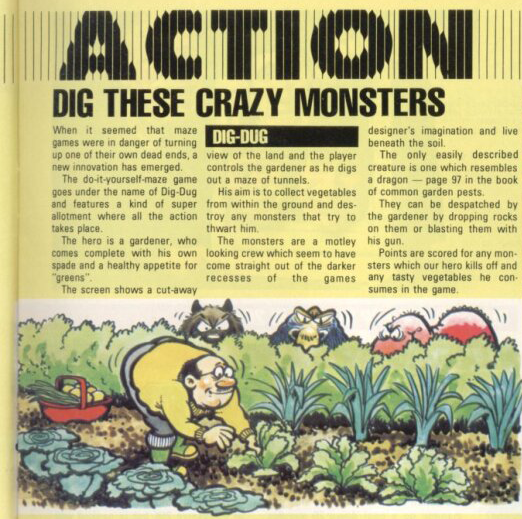 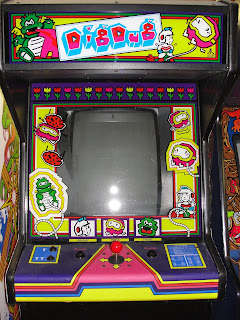 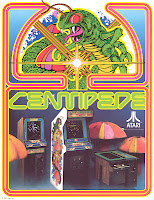 Centipede was and still is a great Atari classic that utilized a 2 1/4'' track ball with one button to fire. It also had Atari's cone buttons also known as volcano player one and player two start buttons. The game has a centipede that makes it's way down the screen your goal is to destroy it completely to move to the next round which is essentially the same thing with increased difficulty and the background colors change. You have mushrooms that you need to destroy that get in your way along with a spider, and other various bugs. When I first got the cabinet it was converted to a "Twin Cobra". Romstar's Twin Cobra was a kit game so it found it's way into various dedicated cabinets, I decided to convert this back to it's original glory which was a centipede. 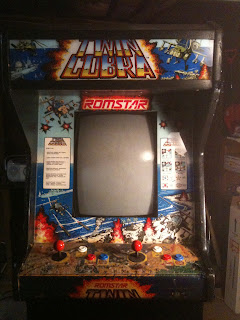 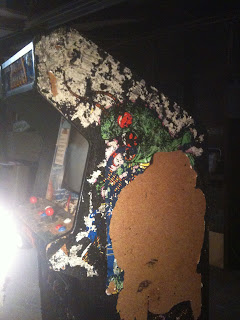 Here you can see the Centipede that was converted to a Twin Cobra. The good news is that I paid next to nothing for the cabinet, and luckily had a working CRT, and Twin Cobra PCB that I would later sell to get money for this project. I ended up selling all of the Twin Cobra Parts the marquee, bezel, pcb etc.. Unfortunately the control panel needed to be replaced since it was drilled too many times. Other parts that needed to be required to convert this back was the Centipede PCB, Marquee,Bezel, Cardboard Blue Bezel, Control Panel, Control Panel CPO, a Track Ball Rebuild Kit, and lastly Side Art. The game was already wired for JAMMA so I decided to keep it that way since I heard many problems existed with the original Atari Linear Power Supply.  While waiting for the parts to come I decided to strip the black paint off the sides of the cabinet sure enough I was right this was at some point in it's life certainly a centipede. The art on the other side was completely missing so I decided to completely go down to the bare I think It's particle board or pressed wood it's not plywood that's for sure. Once I got it down to that point I sanded, primed, and painted it white. 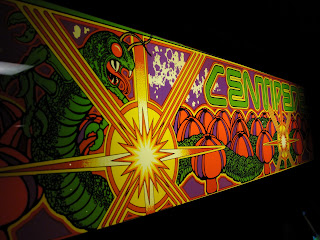 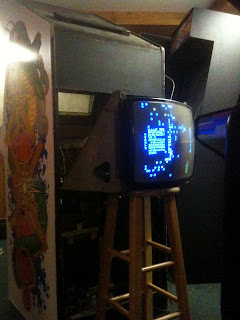 The parts came in and looked great. It was looking more and more like a Centipede. Since I was keeping it JAMMA I needed to obtain a JAMMA Adapter, I remember it was tough matching up the p1 up,down,left,right to correspond to the track ball movements properly but eventually all was working. Once the controls were working the track ball still needed to be rebuilt. Basically 6 new bearings and 3 new rollers, in addition to a new 2 1/4'' snow white track ball made it rolling smooth again. I can't emphasize enough how installing a new rebuild kit for the track ball has such a massive impact.

I was testing the monitor outside of the game to make sure it was working properly before installing. As a side note I find that the best way to get these machines into a basement is to reduce the weight as much as possible. You want to pull the monitor, glass bezel, back door, sometimes even the control panel, and not a bad idea to remove the PCB for protection. After everything was installed it's really hard to tell this game was ever a Twin Cobra. I'm glad I was able to restore this game to it's original glory. Below is a photo of the end result. 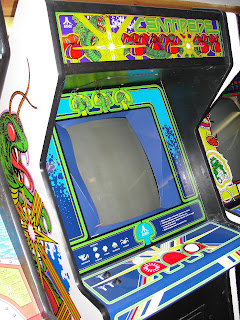