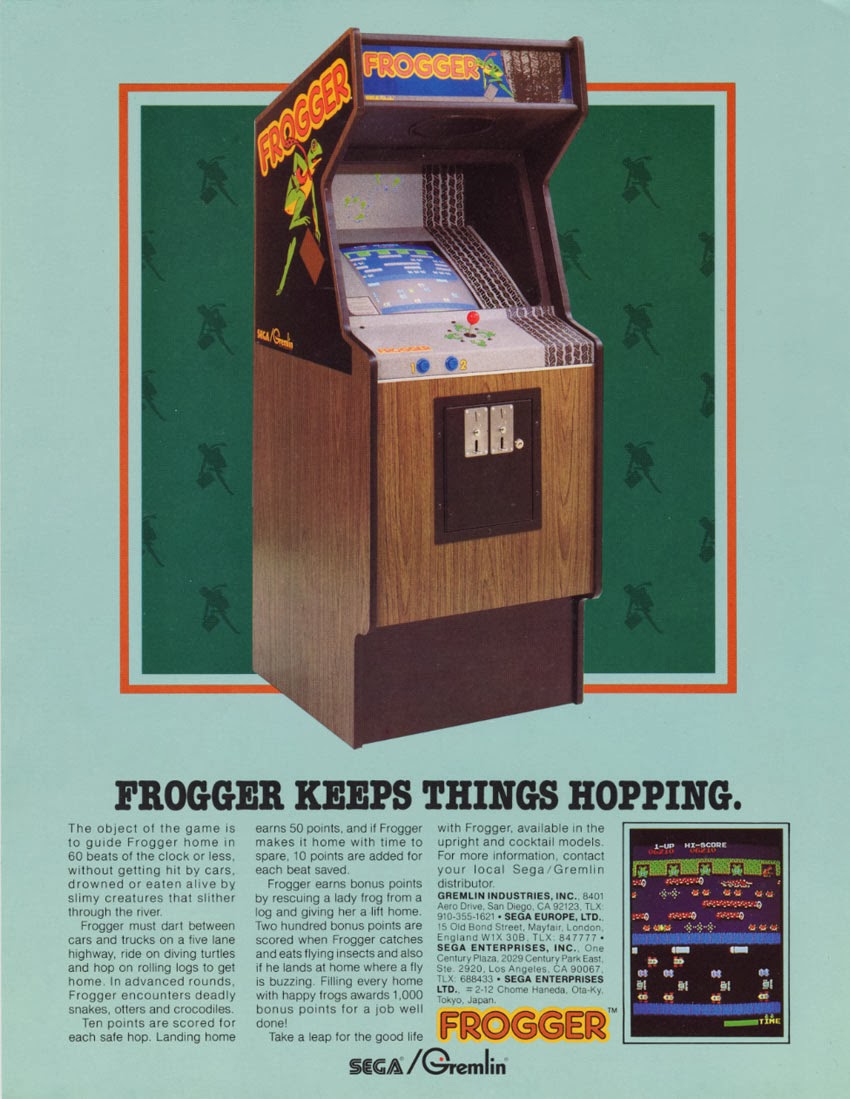 In 1981 Konami produced Frogger which was distributed by Sega / Gremlin. The game was simple you controlled a frog with the joystick moving up, down, left, or right.  The game requires you to get your frog safely to the other side while avoiding cars, trucks, snakes, alligators, otters, disappearing lily pads. The game is all about timing and being patient. Although if you safely make it to the frogs home on the other side quickly you will be rewarded bonus points. Other ways to rack up bonus points is by rescuing your frog friend or eating a fly. Speaking of timing and patients for whatever reason these games don't seem to pop up as often as you would think. I was lucky because I went on a road trip and grabbed two games in one shot with one being the Frogger.

The game was completely dead when I picked it up, I knew I was going to need to invest some time and money into getting things hopping again. The cabinet was beat so I wanted to completely strip it down remove virtually all parts and sand / bondo the cabinet. 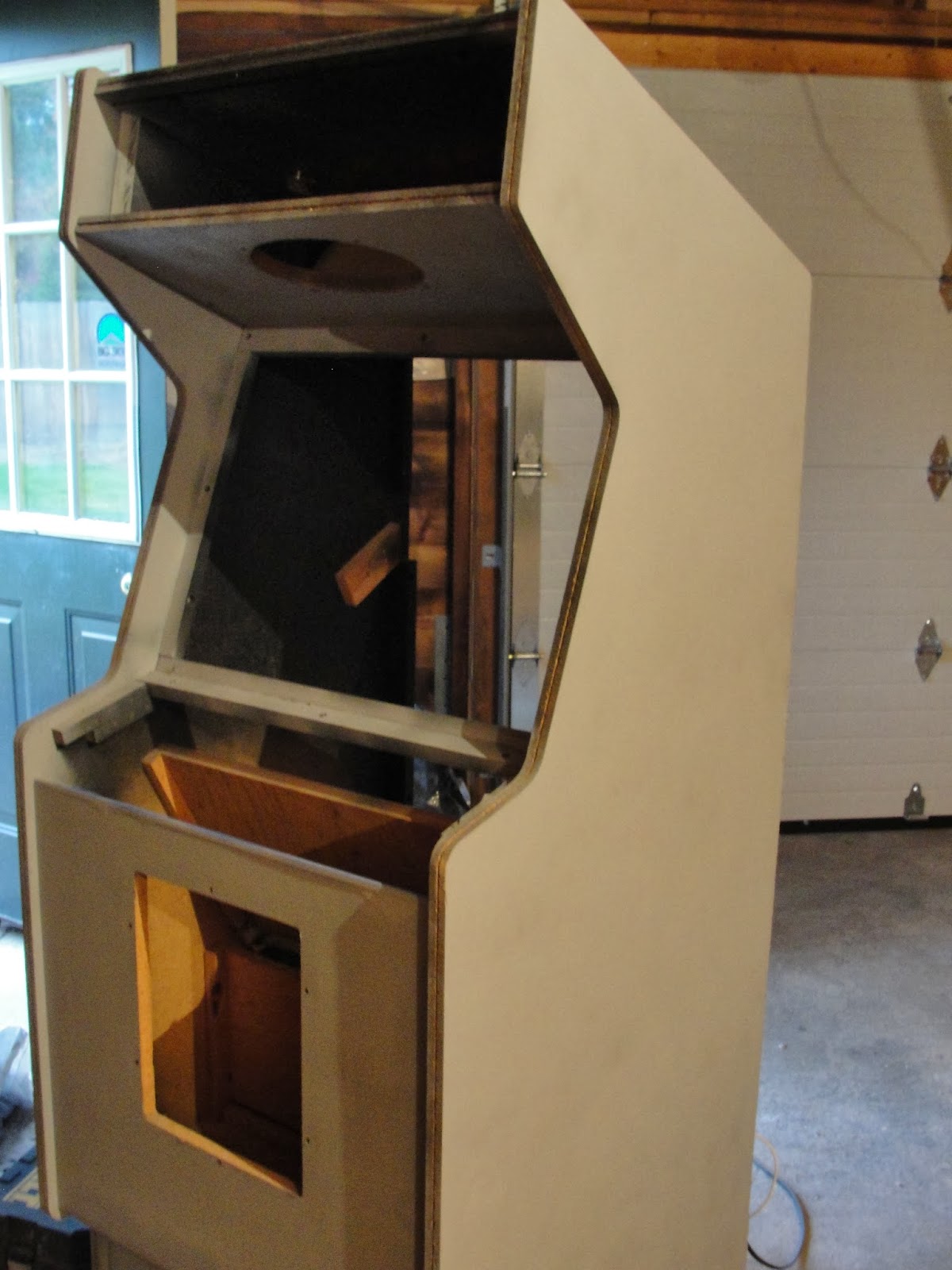 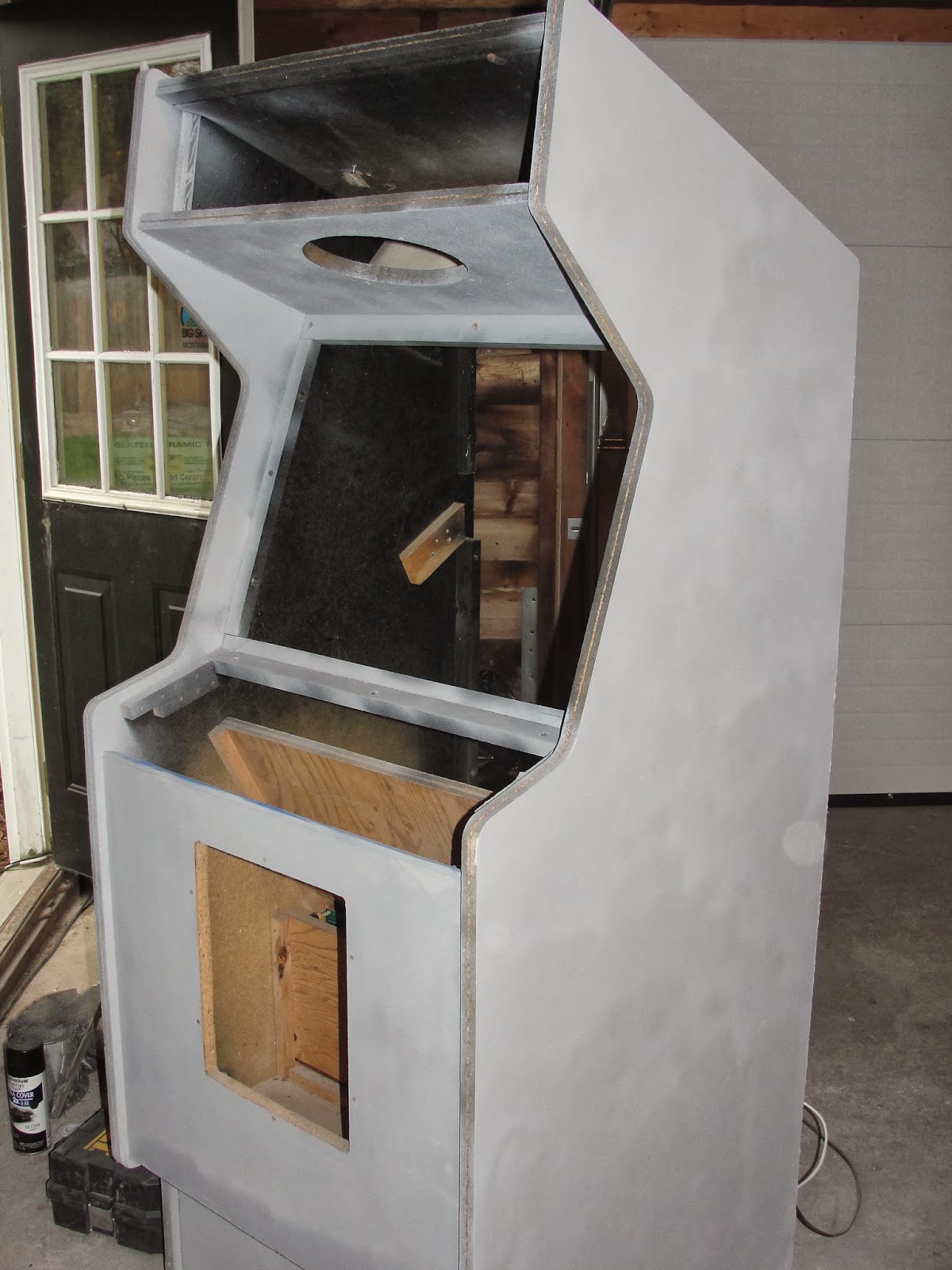 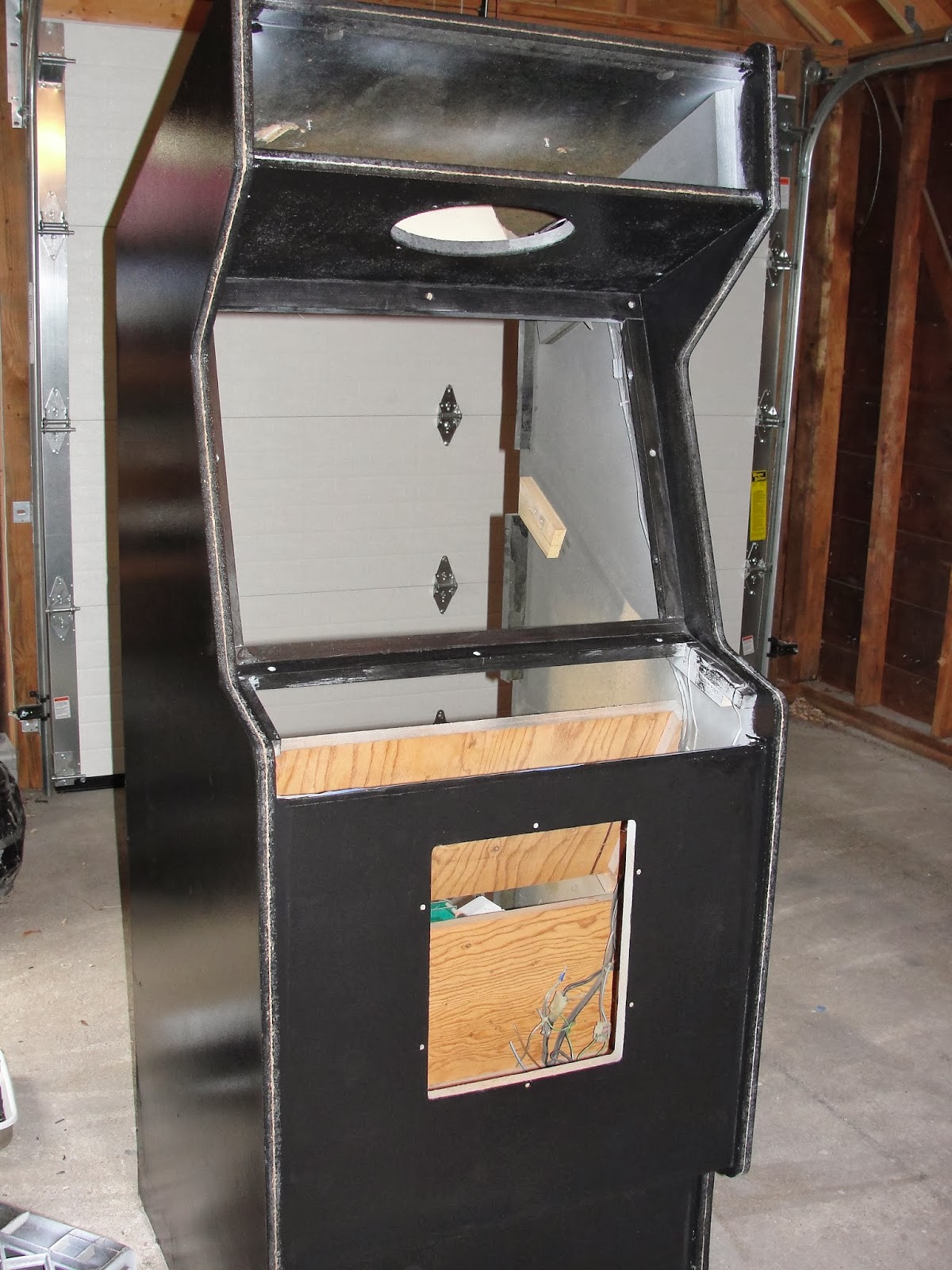 The original cabinet had a wood grain look, so I wanted to achieve this and keep it's cheesy but classic look. I looked into using a laminate and a vinyl, I choose vinyl since it was available at a very cost effective 24 bucks. I used a roll from home depot it was called "Con-Tact Creative Covering". This stuff was very easy to use and an exacto blade made things a breeze.
. 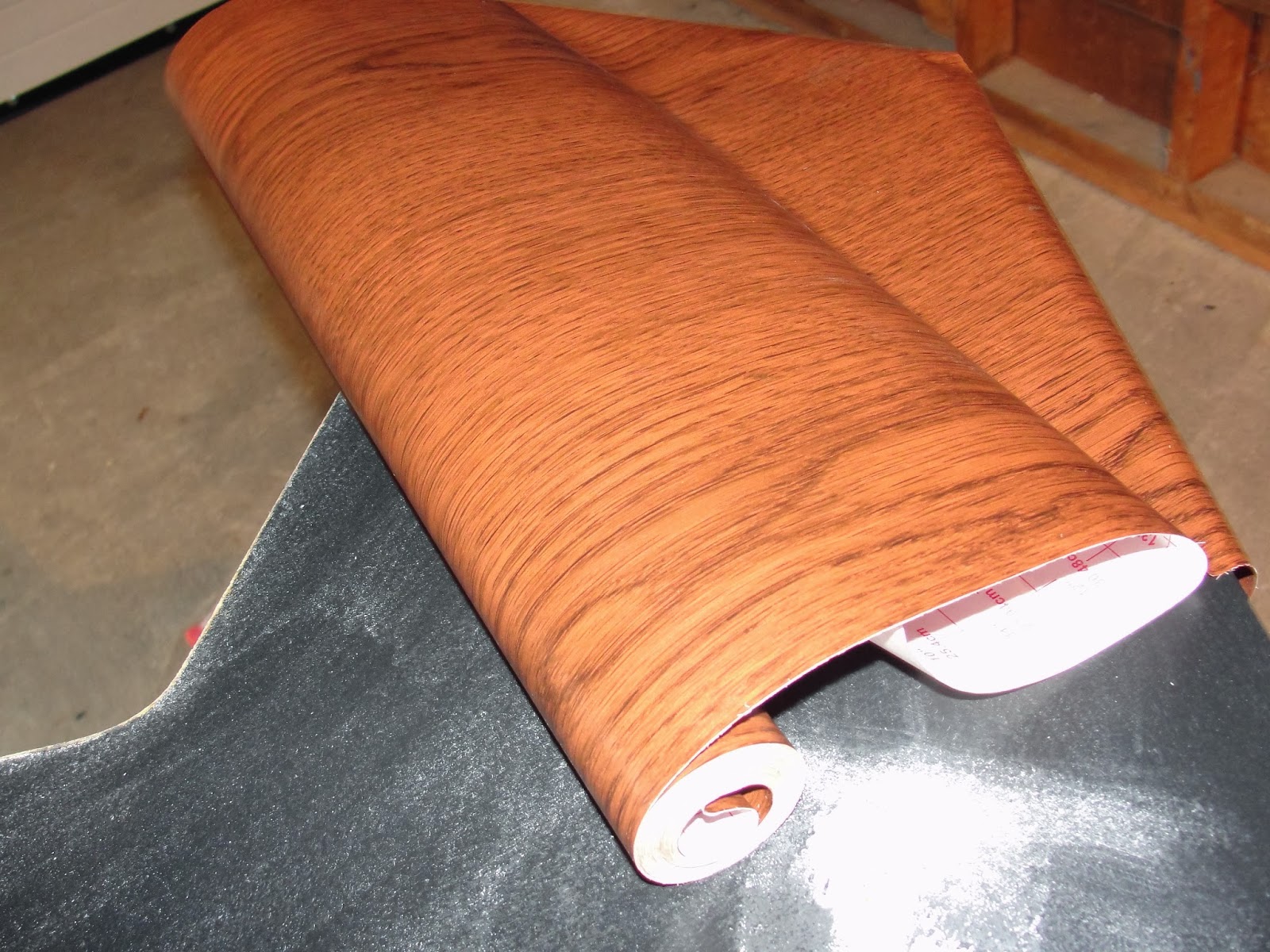 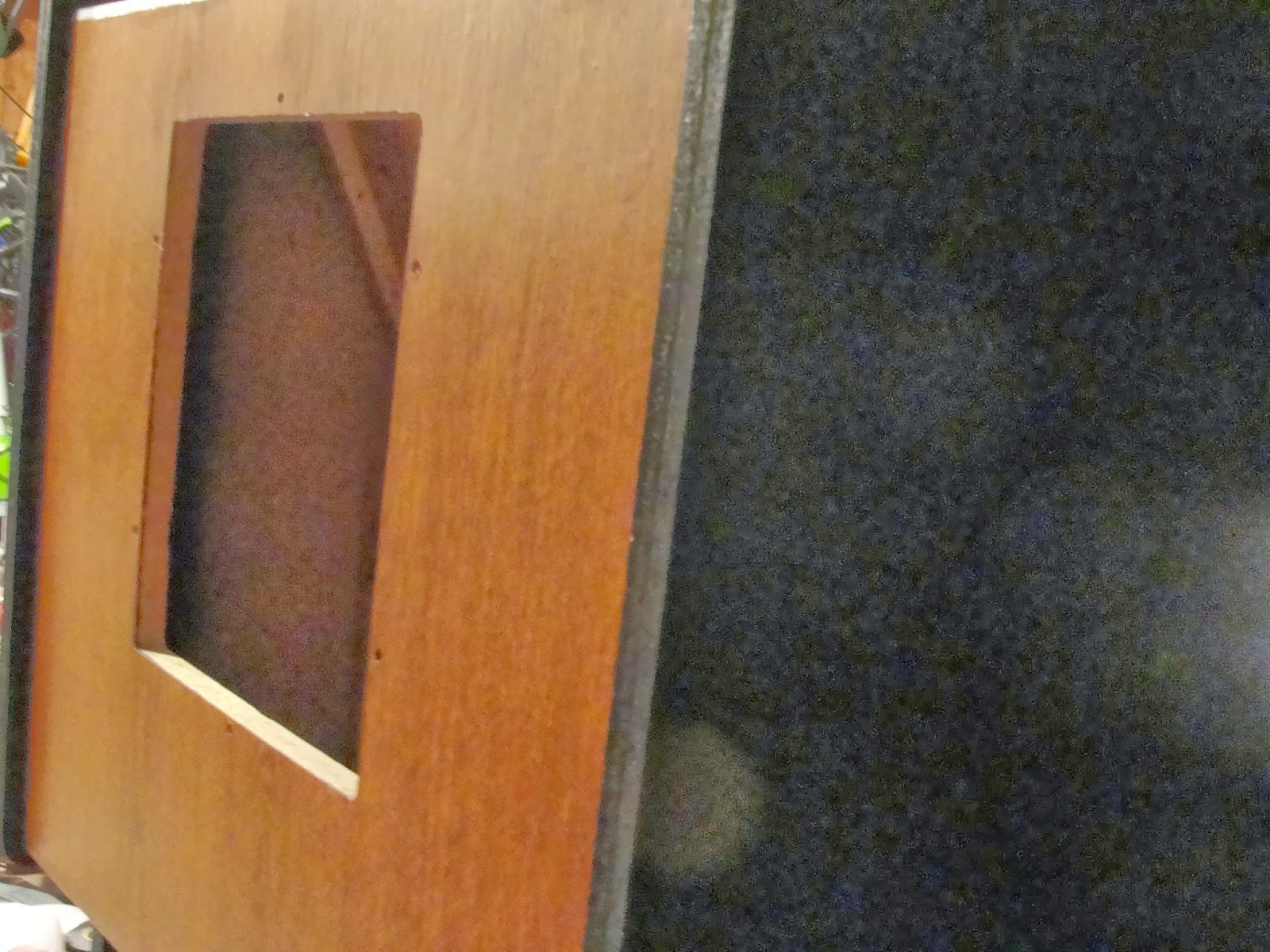 I basically gutted the game and disassembled the existing wiring, I ended up just using a new switching power supply unit along with a Jamma harness and I used a Konami to Jamma Adapter on the original PCB. To my surprise my original PCB was working but I just ended up ordering a back up off ebay. 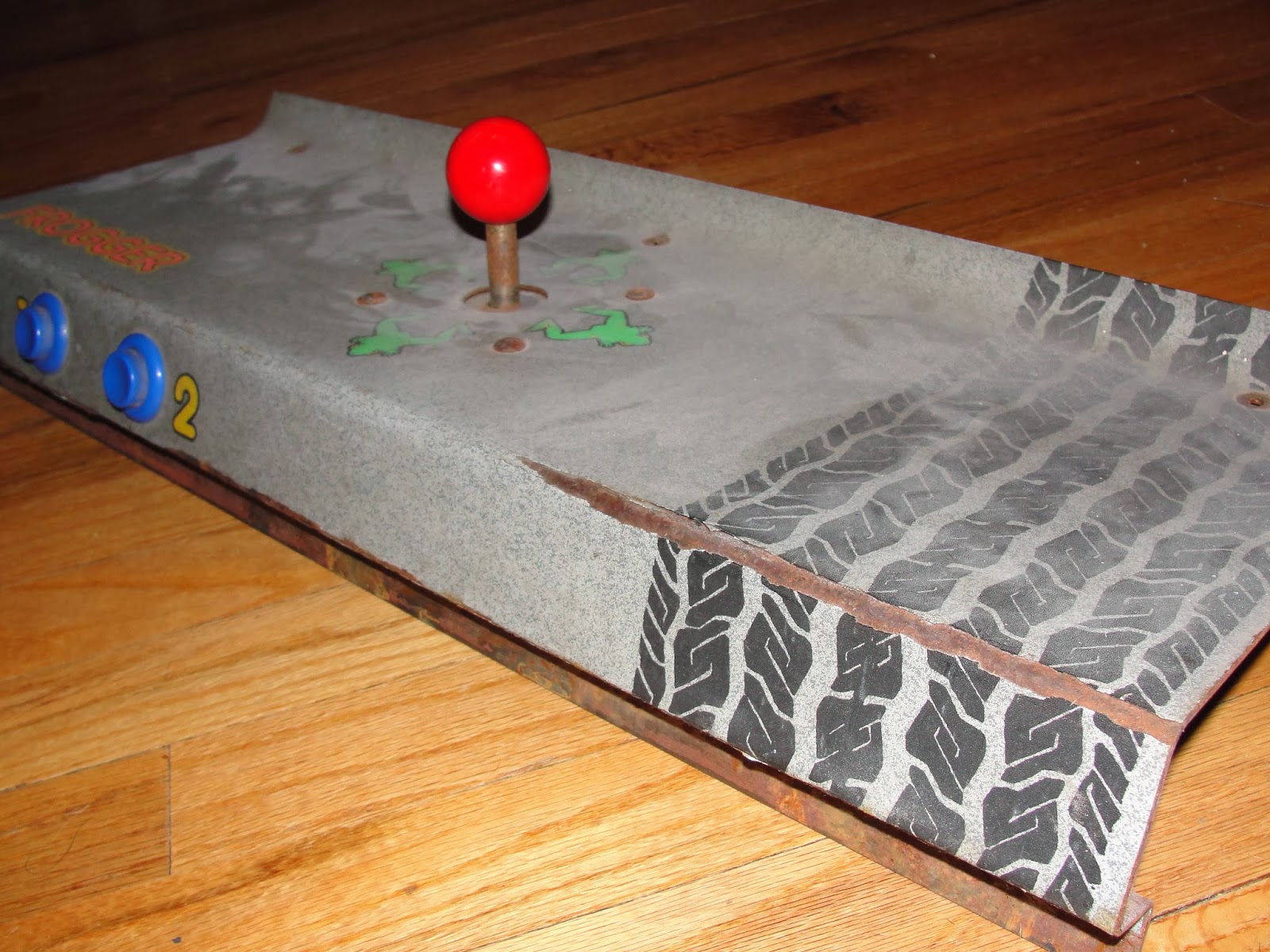 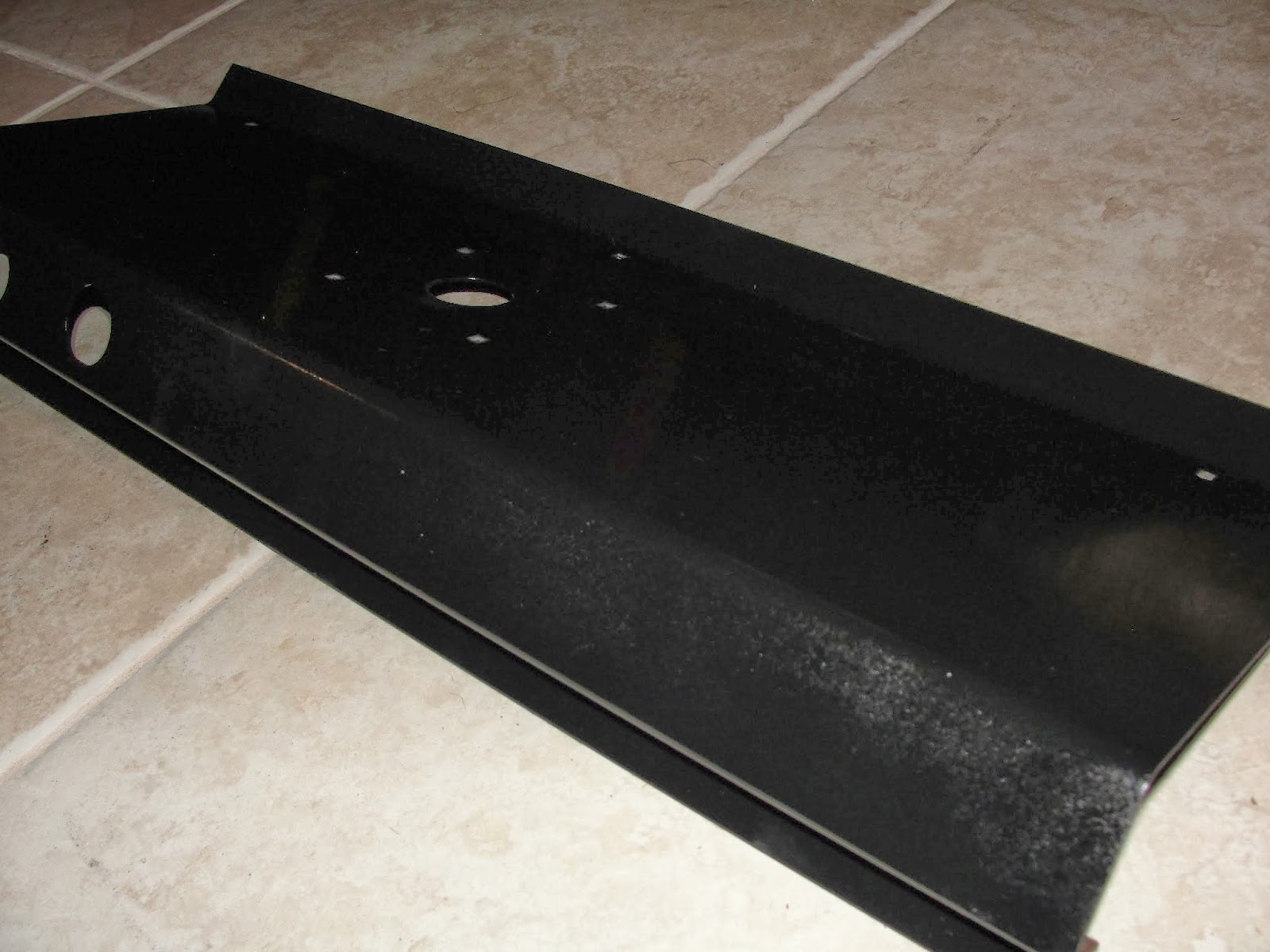 The control panel was in decent shape but I decided to replace the overlay. I stripped the original overlay with my wallpaper steamer (which works great you can use it indoors no chemicals), I then proceeded to spray the metal control panel to prevent future rust. Once that was done I slapped on the new control panel overlay, along with I threw the joystick into the chuck of my drill to shine it up and take off the 30+ year old crud off. Once I rewired and put back together it was looking much better.

Cosmetically I was coasting along however the original CRT was dead. I decided to recap the G07 monitor. I'm not sure if anyone else is familiar with removing a Frogger monitor but it's not fun, the monitor was bolted through the wood frame which had various safety metal / wood blocks that needed to be removed along with the plastic and cardboard bezel needed to be removed. While I had the bezel off I decided to clean it along with using novus on the plastic bezel to buff out any minor scratches. 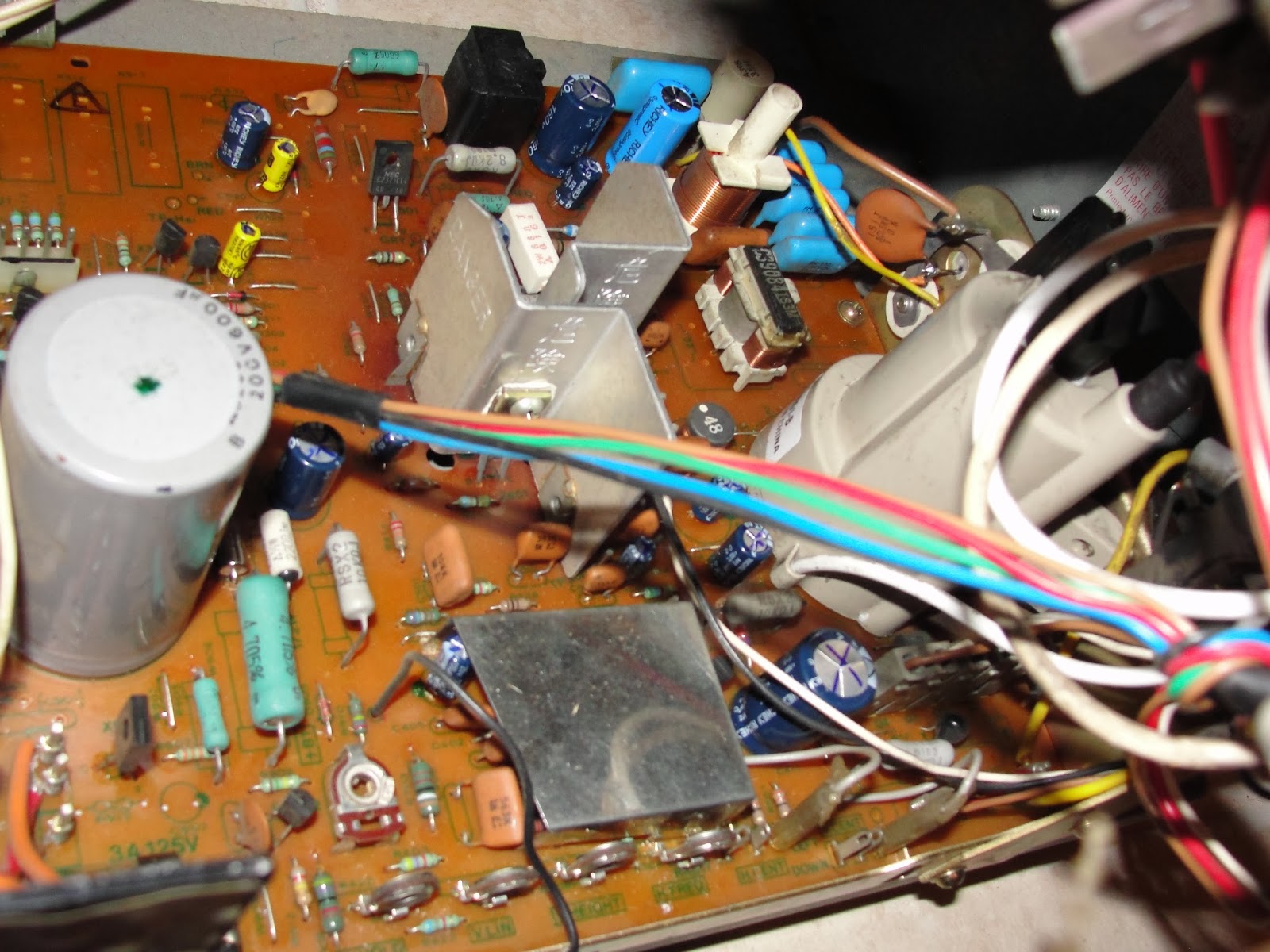 Recapping a monitor is tedious & time consuming and flat out nerve-racking (at least to me) for anyone that's done a cap-kit before knows what I'm talking about. Essentially overtime the capacitors dry out and need to be replaced. In order to replace them you need to know the value for each one, they are however often sold as kits. The monitor needs to first be safely discharged along with following a map of where each cap goes. Along with replacing the caps I also replaced the fly back, voltage regulator, hot, width coil.

I don't know what possessed me to do so but I guess I wanted to have my Frogger look as much as the original flyer as possible so I decided to order side art for it, why I don't know considering it gets lost when wedged between two other games in a row. I also painted the speaker grill, cleaned up the marquee, sanded down the coin mechs, replaced the marquee light with a new one, new T-molding. All and all the game came out nice and clean. 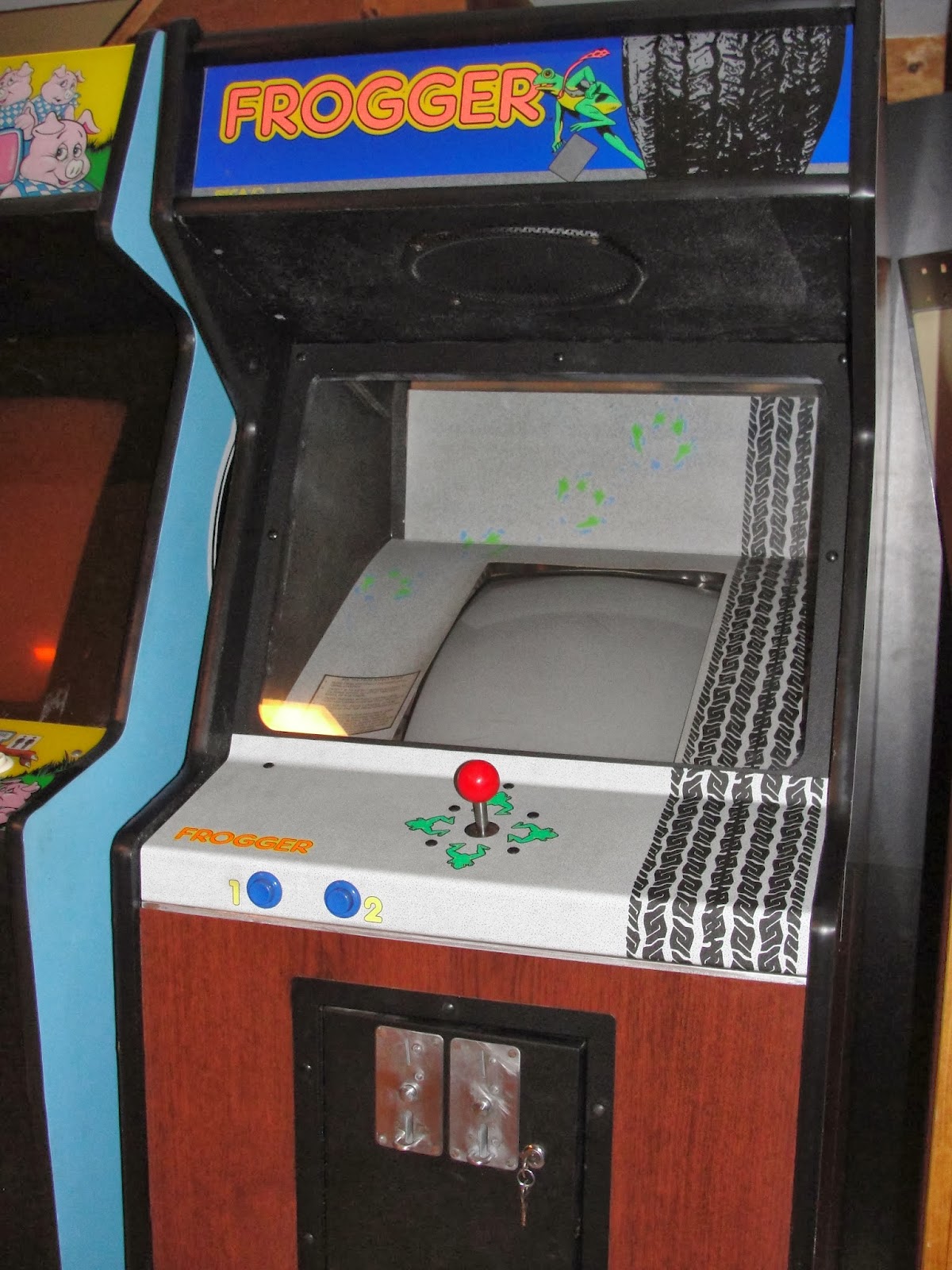 I'm not sure if it was Konami or George Costanza which made Frogger more popular. "The Frogger" is the 174th episode of the NBC sitcom Seinfeld. Without giving the episode away essentially George tries to acquire an old Frogger machine on which he's held the top score since high school. With the Perfect combination of Mountain Dew and mozzarella GLC high score stood the test of time after all these years.
A clip on youtube can be seen here: